Spinal dural arteriovenous fistulas (SDAF) are the most common vascular abnormality in the spinal cord (1) accounting for 70% of vascular spinal malformations (2).  They are an uncommon cause of myelopathy occurring between 40-70 years of age and affecting men much greater than women with a ratio of 4:1 (3).  The overall occurrence is estimated to be 5-10 cases per million per year in the general population, although this is thought to be under reported (4).

SDAF are thought to be acquired diseases with an unknown aetiology.  The AV shunt is located in the dura close to the spinal nerve root and the radiculomeningeal artery enters a radicular vein.  The subsequent increase in venous pressure due to arterialisation of the vein causes congestion, oedema and hypoxia leading to myelopathy.  Common sites are the lower thoracic and lumbar cord (5).

A case of SDAF in a 57 year old male patient is presented.

A 57-year-old gentleman presented to the Emergency Department with a two month history of progressive lower limb weakness. Eight months ago the patient was involved in a cycling accident fracturing his T12, scapula and clavicle on the right side and was unsure if this was relevant. Patient’s initial assessments were carried out by a junior doctor and his lower limb neurological examination was unremarkable including myotomes, dermatomes and deep tendon reflexes.  The patient reported subjective saddle anaesthesia at that point so a lumbar spine MRI was requested,which was unremarkable.  He returned to the Emergency Department one month later and had a similar examination, again by a Junior Doctor, and was referred to Neurology as an outpatient.

Eleven days later the patient attended the same Emergency Department and was seen by an Advanced Physiotherapy Practitioner complaining ofa four month history of bilateral lower limb weakness. The patient denied any back or leg pain.  He was previously cycling 100km plus a week but now ceased due to lack of strength and could not walk more than 200 yards without the feeling of weakness in his lower limbs.  He complained of bilateral lower limb paraesthesia from the waist down. The patient’s medical history was unremarkable and he was not on any prescribed medications. The patient denied any symptoms consistent with infection or spinal malignancy.  There were no spinal red flags for malignancy or infection on any assessment.

Objective examination revealed reduced sensation in the lower limbs bilaterally from the level of the anterior inferior iliac spine.  Myotomal assessment was unremarkable with 5/5 power using the Oxford scale in both lower limbs.  He had very brisk knee reflexes bilaterally and normal ankle reflexes, equal right to left.  Clonus was negative but there was an upward plantar response.  A PR examination was wholly unremarkable for sensation or tone and upper limb neurology was unchanged.

His limbs were pink and well perfused distally with dorsalis pedis and tibialis posterior pulses palpable and equal.  Capillary refill was less than two seconds.

The differential diagnoses at this point included

External Iliac artery endofibrosis if no neurosurgical / neurological cause

A whole spine MRI was arranged for 8am the next morning this showing abnormal  high  signal  within  the  thoracic  cord  from the  level  of  T6  down  to  just  above  the  conus. There were abnormal flow   voids posterior to the cord. These appearances are diagnostic of a spinal dural AV fistula. 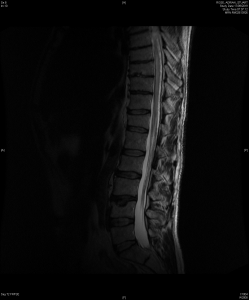 The patient was rapidly referred to neurosurgery and seen two days later by a Consultant Neurosurgeon.

Initial management was spinal angiography / angioseal eight days post scan.  However, during the procedure the patient became profoundly bradycardic and hypotensive.  He then developed a slowly spreading erythematous rash and the procedure had to be ceased for emergency treatment of anaphylaxis.  No fistula was identified.

The patient was discharged home mobile with a walking stick and self-catheterising and for Urology follow up.  Research would suggest the greatest improvement in the first three months with continued improvement expected for twelve months (7).

This previously fit and well 57 year old repeatedly presented to an Emergency Department that is a tertiary referral centre for neurosurgical cases.  Symptoms were largely subjective and subtle to pick up on examination.  By listening to the patient’s clear history of reduced exercise tolerance and subjective weakness the correct investigation was performed eliciting an unusual diagnosis.

The patients reported symptoms of gait disturbance and claudication type symptoms are the most common in presenting cases of SDAF (4).  Interestingly Jellema et al, (2003); found sacral root symptoms to be present in 64% of an 80 patient series.  These included disturbance of micturition, faecal incontinence, sensory loss in the buttocks, erectile dysfunction or involuntary ejaculation.  Whilst this patient reported transient saddle numbness on their initial presentation further symptoms such as those listed above were not prominent in this case.

Early diagnosis is difficult due to nonspecific features such as gait disturbance or weakness post exercise and sensory loss in the legs.  Differentiation from a polyneuropathy is based on the rare involvement of the upper limbsin SDAF (except for cervical lesions which are extremely rare (7).  Difficulty with micturition is rare in polyneuropathies but common in 80% of cases at diagnosis with SDAF (4).  Furthermore lower limb sensory and motor loss is often asymmetrical in SDAF but symmetrical in polyneuropathies.  Finally when upper motor neurone / long tract signs present such as the Babinski sign this excludes pathology isolated to the nerve roots or peripheral nerves.

SDAF id rare pathology and can take months to years before an established diagnosis is formulated. Evidence suggests that the median time to diagnose such pathology is 15 months (4) (6).  Delays in diagnosis can lead to severe lower limb weakness and paraplegia in some cases (4).  Historically outcomeswere linked to early detection and intervention (6).  A more recent study questioned this but found that the level of pre-operative disability is more strongly linked to post-operative recovery and outcome (7).

In middle aged men presenting with subjective lower limb weakness, worse with exercise, ascending motor and sensory deficits, and any dysfunction relating to the sacral roots, SDAF should be considered as a primary differential diagnosis.

Thank you for paying your £25 membership fee and setting up a new standing order.