Cauda equina syndrome (CES) is a rare condition which results in altered function of the cauda equina (Quaile, 2019). CES can lead to permanent loss of bowel and bladder control, saddle anaesthesia and lower limb weakness (Dionne, 2019).  It is commonly associated with lumbar disc prolapses and presents with differing symptoms; many of the clinical signs are often vague and inconsistent (Angus, Elmajee, Verma, Mohammad & Siddiqu, 2016). CES is the most common cause of peripheral neurology (Dionne et al., 2019). With 1-3% of lumbar disc prolapses resulting in CES, with 2-6% of patients being managed surgically (Quaile, 2019).

The identification of CES is often reliant on identifying red flags (features of serious pathology) from subjective and objective examination findings (Todd, 2017). Red flags associated to CES are often bilateral radicular pain, saddle anaesthesia, sexual dysfunction, bladder dysfunction and bowel dysfunction (Gardner, Gardner & Morley, 2011; Todd, 2017). Diagnostic accuracy of red flags to identify CES is debatable with some authors questioning there worth due to heterogeneity of presentation (Dionne et al., 2019). Interestingly some red flag symptoms such as absent perineal sensation, have been found to identify irreversible signs of CES, which Todd (2017) describes as white flags and late symptoms of CES. In the future, classification of early and late red flag symptoms may influence clinicians index of suspicion of CES guiding investigations and treatment. This case study explores a 42-year-old male who presented with no traditional red flag signs for CES however he was diagnosed with CES following MR scan and had an emergency surgical decompression.

A 42-year-old male presented to the Emergency Department with a 5-day history of central lower back pain and left lower limb sciatica. Two days earlier he visited his GP who prescribed pain relief and provided safety-netting advice on CES such as saddle anaesthesia, bowel or bladder incontinence and limb weakness. On the day of assessment, he had attended the Emergency Department due to pins and needles and altered sensation in his right lower limb and groin, this had improved compared to the ACP initial assessment.

The patient was admitted by the emergency department on the Atraumatic Back Pain Pathway and was assessed by a Trainee Advanced Clinical Practitioner (ACP) with a physiotherapy background. The patient reported a 5-day history of central back pain, left lower limb sciatica, varying altered sensation in his right lower limb and he was struggling to take his socks off. Previously he was fit and well with no past medical history and was on no prescribed medication. On history taking the patient denied any red flag symptoms for cauda equina, malignancy or infection. These specifically included CES red flags; sexual dysfunction, erectile dysfunction, saddle anaesthesia, bladder dysfunction and bowel dysfunction.

On objective assessment respiratory, cardiovascular and abdominal assessment were all normal. On neurological assessment completed in supine the patient presented with mild altered sensation in the lateral aspect of right lower limb distal to the knee (L5/S1 dermatome) and reduced power on myotomal assessment of right ankle dorsiflexion (L4), great toe extension (L5) and ankle plantarflexion (S1) scoring 4/5 on the Oxford scale. Interestingly on functional assessment the patient was unable to single leg heel raise or toe raise and on gait assessment had reduced heel strike. Single leg heel raises and toe raises are often used by spinal surgical consultants to identify subtle lower limb weakness. Due to the patient being unable to complete this it could be argued that the patient scored 2/5 on the Oxford scale. This highlights the importance of functional assessment to challenge patients muscle power and the variation in power grading in relation to position i.e Supine versus weightbearing. Proprioception, reflexes, clonus, Hoffman’s, pre and post void bladder scan, PR assessment and plantars were all normal. Upper limb neurological assessment and blood results were all unremarkable.

A lumbar spine MRI was requested by the ACP, vetted and completed that day at 11am which reported cauda equina compression secondary to a large central and left paracentral disc extrusion and sequestered fragment at the L4-5 level. 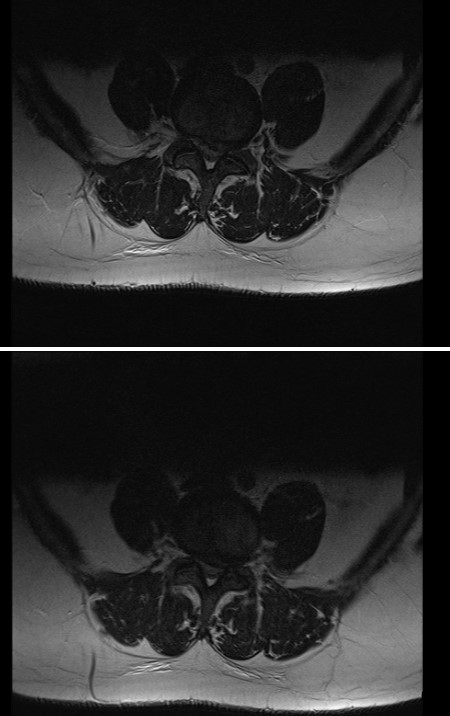 Post operatively the patient had a complete resolution of his left lower limb sciatica pain and right neurological symptoms. His gait pattern returned to normal and he reported no CES red flags. The patient was discharged home independently mobile and without a pain relief prescription.

The patient presented to an Emergency Department which has a designated Atraumatic Back Pain Pathway Service team which is led by a Consultant Spinal Physiotherapist and Advanced Physiotherapy Practitioners. Salford Royal Foundation Trust is the tertiary centre for complex spinal and neurosurgical services for the region. The reported symptoms and clinical examination findings were atypical of a clinical diagnosis of CES (Lavy, James, Wilson -MacDonald & Fairbank, 2009). However, Gardner, Gardner and Morley (2011) suggests that sciatica with a neurological deficit that may be deteriorating and becoming bilateral should be considered as a red flag symptom of CES. Furthermore, the altered neurology on clinical examination was difficult to illicit which demonstrates the importance of thorough history taking and assessing patients in function and gait analysis. Arguably this weakness could have been associated to pain related and limiting weakness. The decision to complete a MR scan was due to the bilateral lower limb symptoms including the weakness observed in function (less than 3/5 in standing). Despite not fitting the traditional bilateral sciatica pattern this increased suspicion of CES.

Interestingly the importance of safety-netting patients is highlighted in this case study as without the GP advice to the patient, the patient would not have attended the Emergency Department. Safety-netting advice must be completed in clear explanations in terms of signs and symptoms to be aware of (Quaile, 2019). Safety-netting advice should include advice regarding seeking urgent medical advice if any saddle anaesthesia, bladder or bowel incontinence, sexual dysfunction or worsening limb weakness; this can be completed through CES clinical cue cards (Greenhalgh, Finucane, Mercer & Selfe, 2018).

A thorough neurological examination is pertinent to diagnosing potential CES, with evidence suggesting that 26.6% of patients diagnosed with CES presented with lower limb motor weakness (Ahad, Elsayed & Tohid, 2015). However, the nature / grade of this weakness is not documented and it is questionable whether 4/5 on the Oxford Scale would meet the criteria for significant motor weakness. Arguably this motor weakness may have been identified early and due to this has resulted in warning for further avoidable damage (Todd, 2017). This poses the question of how to quantify the extent of weakness to determine weakness as a red flag and should all neurological assessment have a functional element such as single leg heel raises/ toe raises and gait analysis. Dionne et al., (2019) somewhat supports this notion as they conclude that key clinical symptoms commonly used as red flags to screen for CES are not robust enough to diagnose CES on their due to poor diagnostic accuracy.

For clinicians, the awareness of early CES diagnosis alongside the urgency of early imaging for CES is important as early surgical intervention can improve neurological outcome (Gardner, Gardner & Morley, 2011). CES can have life changing consequences and if surgical intervention is delayed irreversible bladder, bowel and sexual function damage can occur (Greenhalgh, Finucane, mercer & Selfe, 2018). It can be argued that the patient had a large disc prolapse which was picked up early prior to traditional CES symptoms being developed. Interestingly the patient did not present with routine, clear, concise red flags symptoms for CES however on the MR scan report a diagnosis of CES was given. This questions whether the collection of traditional CES symptoms correlates correctly identifies CES radiological signs or whether this patient’ssymptoms were identified prior to developing bladder, bowel of sexual dysfunction (Gardner, Gardner & Morley, 2011) A thorough neurological assessment with functional elements was required to illicit the weakness. In keeping with Todd’s (2017) notion it may be valuable to develop guidelines and more specific red flags for patients who are at risk of developing or have early CES. There is ongoing work by the National Back Pain Network in regards who are hoping to publish work in March 2020 on this. There is certainly a call for further research to evaluate red flags in combination and determine diagnostic accuracy (Dionne et al., 2019).

Thank you for paying your £25 membership fee and setting up a new standing order.